LEGO® SERIOUS PLAY® and it use with staff and students in Higher Education. 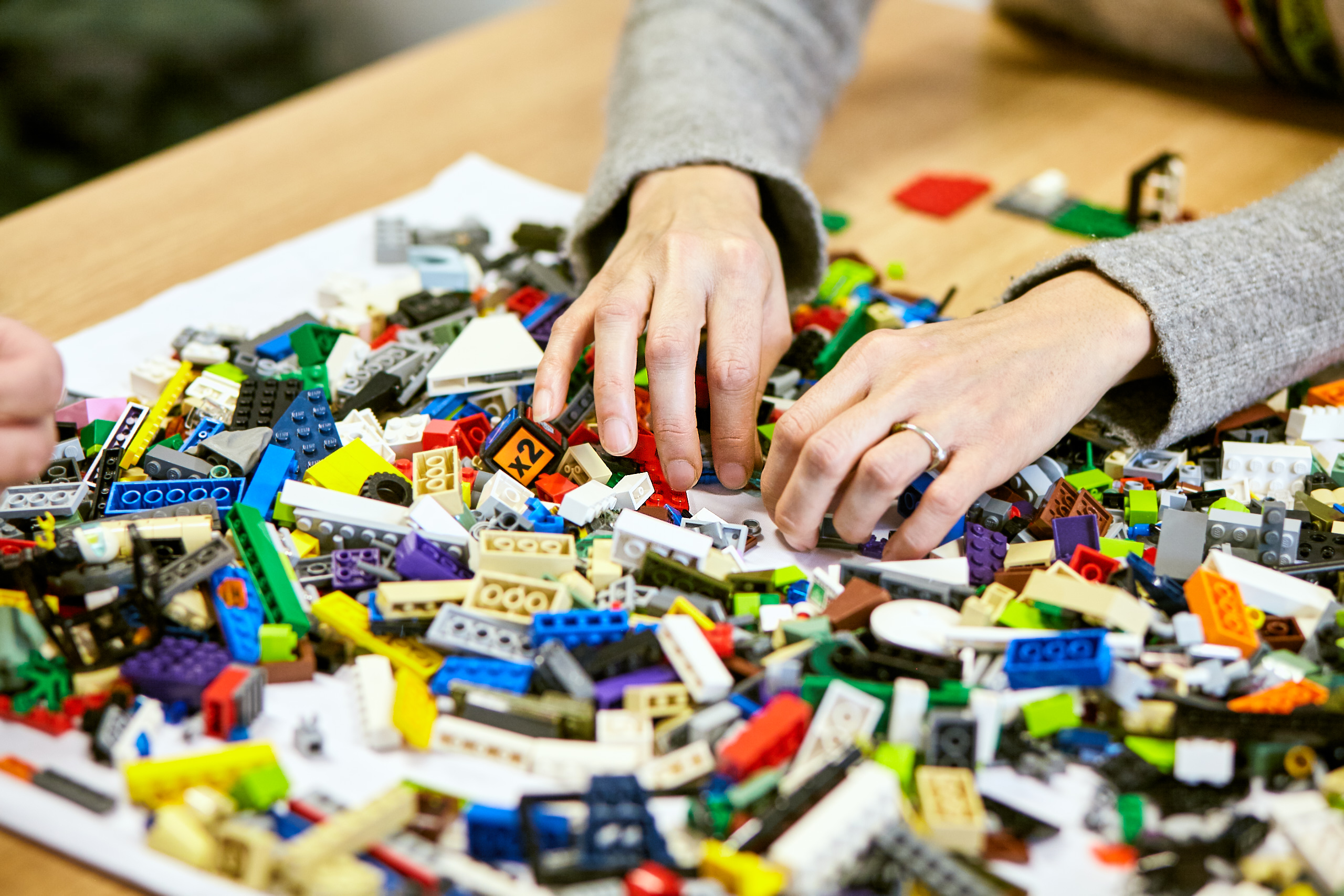 If you have read the LEGO® SERIOUS PLAY® open Source document you will have been introduced to the basic structure of the method of challenge, build, share then reflect. Also, how the methods can be developed into a workshop and used to develop not only individual models responding to individual challenges but also shared models produced by a group responding to a shared challenge. The workshop structure will likely repeat the build and sharing stages to each time building or arranging models into complex system solutions.

The first and arguably the most critical step in designing a workshop is to think about is the challenge you wish to investigate. In LEGO® SERIOUS PLAY® terms this is what will you ask the participants to build? I have been amazed at the sort of models which are easily and rapidly constructed by participants in response to very challenging questions. Challenging to answer in words but seemingly easy in bricks! For example; build a model which represents the challenges of co-design from your perspective, build a model which represents the challenges of induction, what is your experience of the current curriculum in terms of employability. All possible in under 10 minutes!

Designing the workshop – how many people?

Design the workshop with the participants experience in mind. Each workshop will be different and will require planning. I have found that setting the times for each build, requires a little experience so building in breaks to catch up can be valuable. Starting to build some experience with a small cooperative group of around four to six is ideal. This size of group will be easy to facilitate and will deliver enough reflection in the sharing to add value and variety to the problem. Any more and it will take too long to do the sharing part, any less and it may not reveal enough. It is not essential to have this many but it’s a great place to start. Start with individual builds, perhaps in two repeat stages then try a shared build. There is plenty advice in the book Serious Work on the practicalities of setting up workshops and handling lots of Lego®.

Designing the workshop – How much Lego® ?

One obvious constraint is the amount and type of Lego® bricks you have available. Lego® make and sell specific Lego® Serious Play® kits which are a joy and have some fabulous pieces you will never have seen before, gold coins and skeletons for example. They also have a wide variety of mini figures with different hats, weapons, tools, hair etc to add to the story you are telling.

The large sets are expensive (Landscape and Connection each around £600) but brilliant, they do take some looking after before and after each workshop with some elements needing constructing and sorting into trays for the ultimate LEGO® SERIOUS PLAY® experience. The landscape set and a connection set both aimed at business strategy. In the world of business workshops are expensive and new sets are a marginal cost bought for each tailor made workshop. In the world of HE this is not as easy.

I have found though that having a wide variety of Lego® bricks and Lego® Minifigures® can works very effectively. You need about 2Kg per six participants with as much variety as you can buy. The smaller LEGO® SERIOUS PLAY® boxes cost around £25 are great for this. Buy a couple of these and add in a classic box of brick with 900 pieces and a dozen minifigures and you will have enough for a table of six people for most applications. Large flat building plates are also very useful for some applications.

Preparation prior to any workshop is vital. With so much to organise this is especially important for LEGO® SERIOUS PLAY®. A well laid our table with Lego already in place is very important especially when workshops become larger.

Will it work every time?

I was expecting to find negative responses in participants from Higher Education. Participants perhaps being cynical about play in Higher Education, sceptical about an unproven method with limited ‘hard’ scientific evidence. I expected reserved, unconvinced, I’m too old for toys and ‘not for me’ attitudes. Thankfully in reality these have been very, very few. I have in-fact been overwhelmed with supportive responses to the workshops from staff and students. They love it!

One of the aspects I have emphasised is to sell the concept, method and basis of LEGO® SERIOUS PLAY® as much as I can at the outset. To bring to the fore the evidence and research which surrounds LEGO® SERIOUS PLAY®. There are clear links to provide a theoretical grounding for LEGO® SERIOUS PLAY® which I use to reassure some of the more sceptical participants. For example, the ‘theory of flow’ developed by Mihaly Csikszentmihalyi, is a core aspect (Csikszenmihalyi, M.1998). It is described by Csikszentmihalyi as a creative state of mind which allows for a peak of cognitive and emotional involvement. According to flow theory, to be in a state of ‘flow’ participants need to have enough challenge to keep them engaged but not too much so as to make them anxious or too little for them to become bored. To maintain ‘flow’ it is the facilitators job to manage the tasks based on their knowledge of the participants. I also use theories from neurology, social constructivism and play where appropriate. This does take up some of the valuable building and sharing time but it is worth it in my view.

In the first five or ten minutes I feel it is essential to ensure everyone is comfortable with the use of Lego® bricks, so I use a simple activity at the start of the workshop to introduce everyone to building with bricks. For some this may be their first time using Lego®, for others it may have been decades ago! Allowing participants to just play with the bricks at the start of the day on a simple task will allow some essential Lego® ‘skills building’ to develop confidence and will help people to feel at ease when presented with bricks instead of pens or post-its.

Design some fun ‘in’ to the workshop, the LEGO® SERIOUS PLAY® method is based on play after all, make it easy going. Strong advice from the book ‘Serious Work is to try putting on music, particularly as people arrive as this is a great way to change mindsets on arrival and make it clear that this is not just another standard flip-chart day. You can even repeat this during the builds.

You will need to use your skills as a facilitator to handle slower and faster participants, and also to encourage some who will not be familiar with being so open and playful. I have found that reminding the participants of the ‘etiquette of LEGO® SERIOUS PLAY®’ is also very important. Stick to timings and do remind people to be quiet when others are building. I have found some people in Higher Education prefer to chat about their ideas than to build.

Often in a business context the outcomes of a LEGO® SERIOUS PLAY® workshop are within the shared understanding developed while building and telling the stories about the models, not really the models themselves. A sort of team building which is familiar in business. The shared experience, the process itself which led to new insights explored by the participants are often the most valuable outcomes. It is tough to capture such outcomes to take away and share with others who have not been part of the process. The most favoured way provided by the facilitator training was to record a video which captured the story being told about the model with the narrator pointing to aspects of the models. Telling the story through the bricks. The book Serious Work (Blair, S. 2014) suggests good photographs of the models can be useful too. Certainly, my experience is that the participants will remember the meaning of the bricks long after the workshop so photos are very useful to those who participated. I can still remember every story from every picture I have of builds going back over 12 months.

Here are some additional ways myself and colleagues have implemented to record some of the outcomes from LEGO® SERIOUS PLAY®.

One of the key outcomes of the workshop is the reflection stage. Initially I was pretty obsessed with the models themselves, however it has become clear that the important aspect is what people ‘find’ during the reflective sessions. The four stages of the LEGO® SERIOUS PLAY® method can be represented with these four circles and the second slide illustrates where the reflection occurs.

“As long as one keep searching, the answers will come”