Explanation of the training, how you become a trained facilitator and what value that adds. 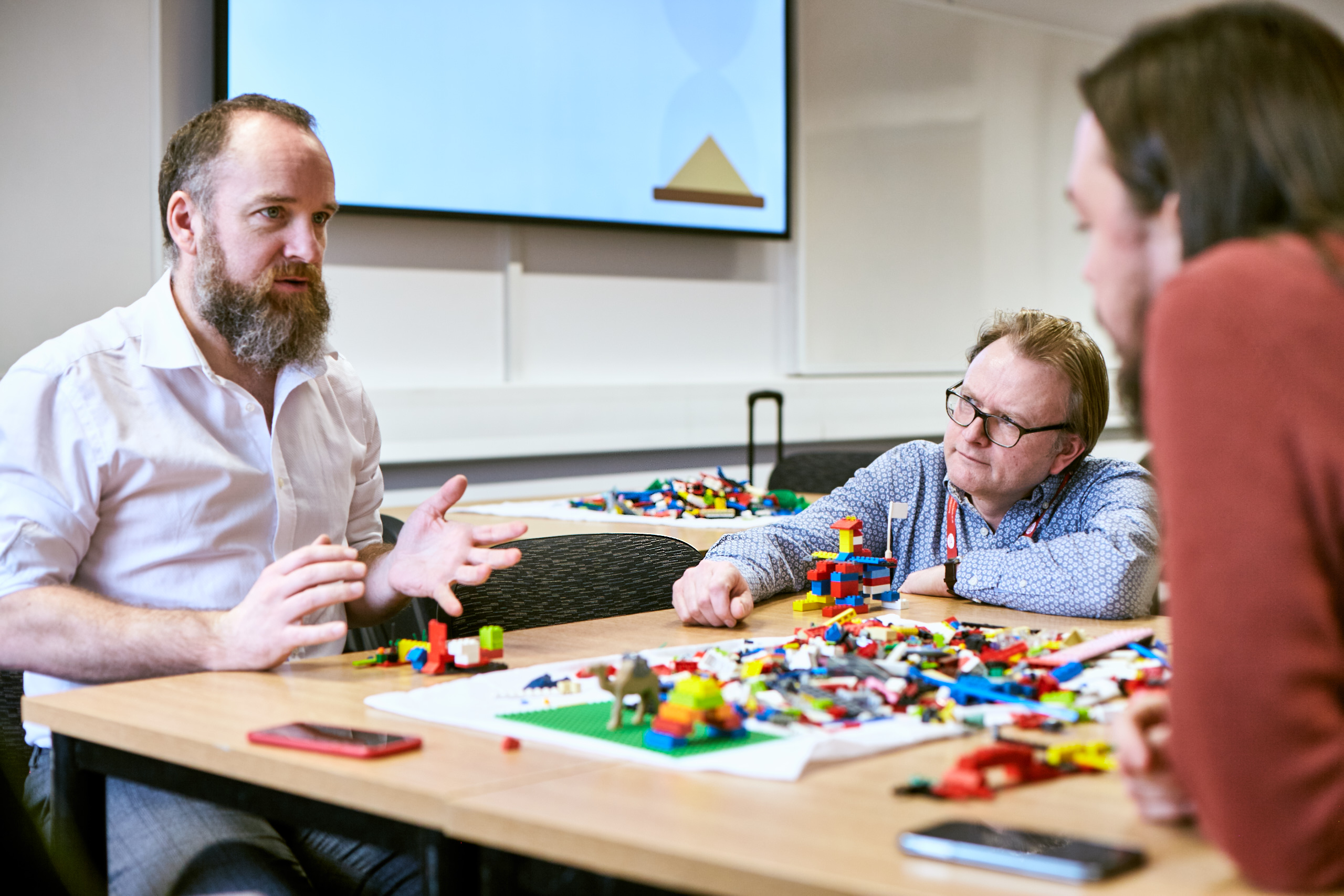 So now that you are aware that this is a method which can be used by anyone, I guess the reason you are at this page is how do you start? My approach was probably similar to your own, how to get involved as quickly as possible with as little time and financial investment as possible. Well here are my tips.

There is probably no better place to start than to read the open source document which has a full description of Lego® Serious Play® methodology and philosophy. It may surprise you that the use of the word philosophy. If you really wish to apply the Lego® Serious Play®. Method then I encourage you to engage with the research and philosophical basis of the method wholeheartedly, otherwise it’s just playing with bricks. Nothing at all wrong with playing with bricks, it just won’t be taking the full advantage of the method.

The open source document was co-authored by Professor David Gauntlett and is available from his website linked above. This will provide you with a great insight into how the method is used and applied. At this point you could just find some Lego® and start using it straight away. Despite this being a very plausible approach as the open source material is excellent, I personally encourage you to resist that temptation.

I would recommend the following approach before you dive in; find someone running a LEGO® SERIOUS PLAY® workshop and participate.

You will find that as a participant, your mind will be opened to the benefits of the method. LEGO® SERIOUS PLAY® involves a leap of faith across a liminal space and I firmly believe that participation in a well run workshop is the best way to really see how it works and appreciate both the joy and value of it. After you have experienced the method first hand, attending facilitator training may be the next step depending on how you intend to use it. My interest in using the method is twofold, I am interested in Lego® Serious Play®. as a method for innovation in business but I am also interested in the method and its application with staff and students in Higher Education for co-design. Much of the formal training is based on seven LEGO® SERIOUS PLAY® methods which are specifically aimed at business strategy so choose training carefully if you wish to use the method in areas outside of business.

Where to get facilitator training

Facilitator training is offered by many suppliers. This will cost around £1200 to £2400 and takes 2-4 days depending on which trainer you choose and what sort of training you think is the most appropriate.
My choices were between the ‘Association of Master Trainers in LEGO® SERIOUS PLAY® and ‘Serious Work’ both linked below. For several reasons I decided to train with one of the companies accredited by the Association of Master Trainers called ‘Bricks and Business’ delivered by Michel Cloosterman and I thought it was excellent. There are different approaches to training and I was interested in the full seven LEGO® SERIOUS PLAY® methods which were promoted by Michel. It also happened that he was delivering a session in my home city of Leeds and fitted with my schedule. The training was very thorough and a very enjoyable 4 and a half days. He is an engaging facilitator and I recommend him as I certainly learnt many useful things that I use in my workshops. I have heard great reports of other trainers such as Sean Blair of Serious Work and Michael Buckle of IntHRFace.

I can also thoroughly recommend the book ‘Serious Work’ by Sean Blair and Marko Rillo. This is a beautifully made and highly practical guide to facilitating meetings with LEGO® SERIOUS PLAY® it is full of incredibly useful information based on years of applying the method. Although this is aimed at business it has a broad approach in its application and offers people new to LEGO® SERIOUS PLAY® some superb advice on working as a facilitator with bag loads of bricks and a group of people with challenge to solve.

Prior to my own LEGO® SERIOUS PLAY® facilitator training I was lucky enough to attend a conference on Co-Design where Professor Alison James had been invited to deliver a LEGO® SERIOUS PLAY® session which I participated in. It lit a fire of interest within me. Alison’s introduction to the method from a philosophical and research perspective was particularly useful to me and I now use this approach when working with colleagues in HE, some of whom are sceptical of the word ‘play’ in Higher education and cynical about creative methods like LEGO® SERIOUS PLAY®

If you and your colleagues would be interested in participating in a Lego® Serious Play® session then please do get in touch and I would be delighted to share my current approach based on running sessions with up to 40 staff.

You can also watch my next video which contains some guidance on using the Lego® Serious Play® method in Higher Education.

“As long as one keep searching, the answers will come”